God I wrote a book the other day...

So today I won't. I know you didn't read it anyway.

I am going now to write a totally trashy post. Prepare. Ok go ahead:

Sometimes when I talk to straight men, I think they're hitting on me. This, is not solely a symptom of my self-obsession, of which I've spoken before. Au contraire, I'm rather inclined to think they aren't [hitting...] [...on...] [...me]. Then when something seems to cross the line that I'm sure means a clear-cut come on, I run it by my boyfriend, half to see what he thinks, and half to see if he's the jealous type (which, in appropriate and controlled doses may give some measure of satisfaction to an evil soul such as mine). He never indulges me, perhaps to confound my sense of judgment in a certain situation, or perhaps just not to indulge me. (To which I retort, unabashedly splaying my predictably bad intentions: "god why can't you just be jealous for once!!?!")

Yet there is always the chance that he doesn't actually think this other character is flirting. And, to boot, it seems as though he genuinely does not care, which makes me wonder further about the situation and my judgment, and whether in fact I would like to think some people are coming on to me who aren't, na na-na.

So here's the most recent number, written by a former college professor of mine, young and straight and male with whom I've been corresponding recently over the kosher subjects of films and foot injuries: I am terribly sorry to hear about your crutches, although they might be considered sexy in a certain light.

So my boyfriend thinks he isn't hitting on me. He thinks it's funny. But I think he is, and that it's not very funny, if that was the intention. But maybe straight men have a peculiar sense of humor, which is totally off my dyke-wannabe radar. So. I dunno. I still think that statement is a clear come on, but since I have no readership yet, I can't very well turn to you for the answer.

Bottom line is: I don't get straight men. Not one stinking bit.
Posted by L at 7:04 PM 2 comments: 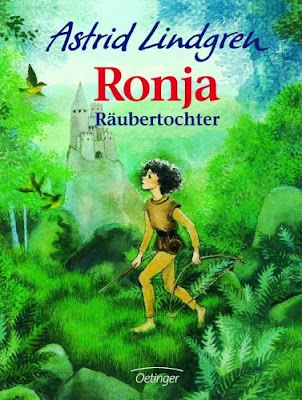 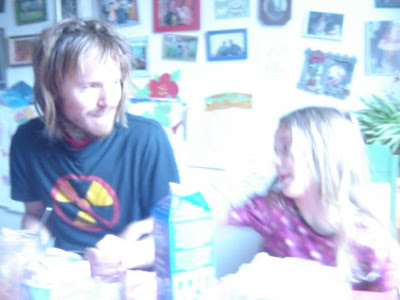 A blurry picture of Ronja sitting next to one of Sid's friends with an anti-nuclear shirt in their kitchen.
Posted by L at 10:57 PM 1 comment: