Dazed and confused or (Anxiety is my middle name)

All of a sudden it feels like there are so many things that I have to remember, and they all just tsunami in on me...

To boot, being an artist, or at least trying to be one is not by any means easy. A massive glacier of potential decisions and deadlines threatens to plow over me...slowly, painfully. Missteps on or around glaciers of any kind, however metaphorical, are also potentially lethal.

I feel pulled in a million directions right now...to places and people I love...Every relationship I have all of a sudden feels brittle, fragile, finite.

Like, I really feel like if I don't keep the people I love very close to me (in proximity) that they will be gone or forget how much we love each other, or that kind of thing. I'm increasingly obsessed with collecting artifacts of my ongoing relationships, everything from voicemail messages to kitchen notes written on the backs of receipts.

And. The potential trajectory of my life all of as sudden feels quite stunted. Like any decision that I make might, like, change or be everything.

I don't know what to do, or who to be, or what to make or where to go or why any of it matters anyway.

A Picture of Dorian P*nties

A few days ago I was putting on my underwear, these bikini-style blue ones with pink edging and little image of a watermelon rind, quarter, half and full on the crotch, and I thought to myself, god, when are these from?

I've been wearing this particular pair of underwear now it seems for years--and yet, they are blessedly stain and skidmark free, they are un-torn and un-holey, and remarkably un-faded. In fact, the little watermelon image is not at all cracked or worn. To boot, my bootie has grown, and shrunk, and grown again and they always seem to fit.

I looked at the tag, and they are by a brand called HUE, which is sold at department stores. I determined that I must have gotten these with my mother, and the last time I went underwear shopping with my mother was when I bought my first bra. It was a totally boring, white Calvin Klein AA stretchy cup (whoo-ey was that back in the day!) and I think I got another one, also CK with rainbow stripes on it, which I fondly nicknamed "retrobra."

INSTANT FLASHBACK ~ I started to remember it well: yes, both bra and panties were acquired on this Mom-instigated shopping trip, a bonafide journey into pre-teen hell, which started at the Pussycat (a bra boutique, in Pittsburgh's Squirrel Hill neighborhood, whose name was enough for me to look stealthily around before I entered, just to make sure that nobody I knew was nearby) and ended at Kaufmann's (a now closed Pittsburgh-based department store, full of floor saleswomen who were dying to give me a buy-two-get-one free panties deal). I could not lift my eyes out of embarrassment the whole time. After some small dispute ("But I don't need any underwear...[sulk]") I gave in, sold out, and bought the panties.

TWELVE YEARS AND FOUR* CUP SIZES LATER, out of school, on my own, and I'm still wearing those panties!

Indeed, I must have bought more than just panties that day at Kaufmann's. More than an arse covering with appealing colors and images. More than my mother's instant appeasement and self-satisfaction.

These panties are made of something different, unearthly. The fibers must be some combination of kryptonite, cotton candy, and ozone...but there is an added aspect written in the very seams, which never have shown wear, something supernatural--dark, even.

As I continue to age, the panties, they stay young, new (ish), always fitting to my ass, despite it's haphazard fluctuation in volume...staring back at me in the full-length mirror, and prodding at the still-open wound of pre-teen awkwardness and mom bra-shopping dates for your then-non-existent titties. PTSD, anyone?! Shudder...


Ah, well, it's one less thing I have to worry about in the unrelenting desert void of adulthood. And yet, one has to wonder, does a girl have to sell herself to the devil to get a decent pair of panties these days?! They just don't make 'em (awkward memories, and panties) like they used to. 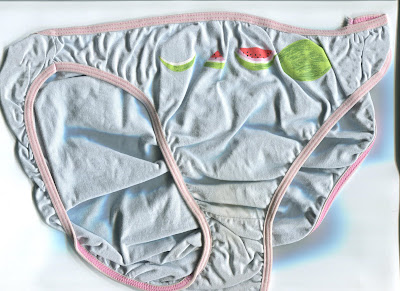 (BTW, they are definitely not this wrinkled when they go on, if you were wondering--it's the scanner, and I think it adds to the effect...)

When my friends and I arrived at the beach in early August, my dad and little sister picked us up and my sister, aged 12, exclaimed, "Yay! Finally I have people to play with!"

She's at that funny age right now, where she isn't quite a teenager, but is very aware of how she dresses and acts in public. And yet the little girl part still manages to shine through at odd, dazzlingly un-self-conscious moments on her part. Sure, we twenty-somethings would love to play with you--after all, isn't that what people do when they get together?

She text-messages constantly, and at the beach she wore Ray-bans and a string bikini and looked very grown up, despite her braces. But she still wants people to play with, and I'm sure she still talks to her stuffed animals in private.

I remember when I was this age--every part of me clung to, lusted for the last little joys of childhood. I never wanted to leave my dolls, little animals, and my picture books, all of which I adored. I played with them in secret long after I'd ever admit to doing such a thing. I wasn't at all interested in boys or dances or things like that. Even into my late tweens, nothing was more exciting than the prospect of getting a new doll. However, I'd swear my interest in dolls was a higher, perhaps even meta-interest; that of a doll connoisseur, a collector, rather than a child. Around the age of eleven, I started to read "big" adult-y books by Hugo, Dostoyevsky, first-person accounts of the civil war, which backed my street cred as a mature being. What, play with dolls? Nonsense, let me get back to Les Miserables, I am, after all, three-hundred pages in! No time for dolls. Behind closed doors it was a different story.

Even to this day I still feel pangs of love for my dolls; as I was cleaning my room in my parent's house, I really couldn't bear to part with a few old friends.

Those tween years were a sad time for me, because I was just so painfully conscious that it would all very soon be lost. I wonder if she, too is sad, or whether, blessedly, she feels more ready for the onslought of hormones and high school girl-politics than I was. I hope she is.

On the way home we stopped overnight in New York, and her sole request in all of Manhattan was to go see F.A.O. Schwartz to play on the big piano. When we did get around to mid-town and I showed her the store, she did all but jump up and down. Annie is already pretty tall for her age, and it was immediately clear that she was one of the rare few tweens onsight. So she looked, did not touch. Admired, but did not express any want. She wished to see the big piano, which was shown in the Tom Hanks movie BIG, which she'd seen once on TV. When I saw her wait on line to go on the piano, she seemed pretty sad. I told her that I didn't want to take off my shoes, so she'd have to go alone (and besides, I had to get it on film!). She must have felt a bit like Tom Hanks did in that film, torn between the person her impulses say she is, and the person she is inevitably becoming. I hope she takes her time.

Here's the movie of her on the piano, taken with my new camera that adds a beautiful vintage-y haze to all the pictures and videos it takes. It's actually really difficult for me to watch how she hesitates, teeters between really wanting to just play, and being aware that she's taller, older, too "big" for this (and also in front of a camera).

To catch up a bit, I suppose I ought to start at the beginning of where we left off (mind you I've also posted not one but TWO other posts today, all for your reading pleasure!).

This summer was pretty busy. I was working pretty hard, and then I took a couple weeks off to go to the beach with my family, see my two best friends from college, help one of those best friends get to her deceased grandmother's house to settle the estate, and to go to Maine to interview my father's father, a born-again Christian faith healer who is all but estranged from his seven children and twenty-five grandchildren.

More on all of that later.

But first, we have a weekend at the beach with the girls. It was so nice to see them again, and just be our goofy selves. We all knew the time together was very precious. Miranda was moving to Buenos Aires in September (she's there now) and Phoebe, on her way back to Greece after working things out with her family.

I had my new camera with me, and a voice recorder...

Pictures're worth a thousand words. :)

My dear, poor lost sheep. Apologies for being such a neglectful blog composatrice--what on earth have you been doing these weeks since last I posted?

Fear not--these weeks that I have been "working," indeed have been but a ruse for the non-blog-reading public. Let them think that I have other preoccupations but my online persona! Let them say, "Ah, Lizzy, she works so hard at her job!" Job is a word that is foreign to me--my true vocations are what keep me awake at night, lusting after blog readers and comment streams...potential laughs to be had, insights to be insought.

Soon, dear children, soon. I have forsaken you long enough, but I have not forgotten you. Your needs are higher than my own.
Posted by L at 7:08 AM No comments: