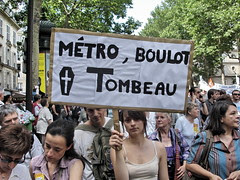 Manifestation Contre Réforme de la Retraite - Juin 2010 - Métro, Boulot, Tombeau
Originally uploaded by decembre
People work too much and for too long in offices. I'm going on vacation at the end of the week, and even as a part-timer, I TOTALLY sympathize with this girl. For non-frenchies, there's a phrase in French that goes "Metro, Boulot, Dodo" (meaning "metro, work, sleep") but obviously this girl has taken it to the next step with the rhyme scheme "metro, work, tomb."
Posted by L at 4:24 PM No comments:

Fourteen Ways of Looking at a Void

So, it's been a while since I've talked much about my love life, but on the almost-first anniversary of my first broken heart I thought my faithful blog readers might be deserving of a little follow up.

I've been reading more and more lately, including a great deal of "destination" literature. Somewhat recently, upon the recommendation of a friend, I picked up an essay called "Thirteen Ways of Looking at a Void," which gives the perspectives of thirteen different people that the author encounters while crossing the bleakest part of the Sahara Desert, otherwise known as the Void. What does the Void mean to you?

Hm, well, for those of you who can't make the connection between tons of reading, the Sahara desert & my love life, let me lay it out there for you: it's been a hell of a dry season!

I can't say I'm sorry that this is the case. If there's one thing being in a romantic relationship for 3.5 years taught me, it's that relationships take a lot of work. And I'm ok being on hiatus.

That said, I nearly fainted when on a semi-inadvertent date a couple weeks ago, el bachelor touched my elbow.

Most times, however, I'm happy to go out where I want to when I want to and not have to give much thought to the interests, attitudes, or feelings of a significant other. This has not universally been the case, and for this, I give you the Fourteenth Way of Looking at a Void, in the following blog entry.


The Fourteenth Way of Looking at a Void, or RELEVANT Inventory of L's Lovelife Over the Past Year Described Objectively in List Format For Your Benefit:

Ineligible Bachelor #1:
Codename: BRECHT EVENS
Encounter of a Third Kind: 1
Location: Random hotel, FRANCE
Presumed Sexuality: Gay
Age: I'd say 32, though it's unspecified.
Occupation: Comic Book Artist
Type: Party Boy
Height Above Eye Level: 7"
Beard: No
Hair: Yes
Practiced Way of Placing Said Hair out of Face with Affected Delicacy That Led One To Believe He Was Gay Even Though It Turned Out He Had a Belgian Girlfriend: Yes
Nuff Said: I'll say!

Hehehehehe...well here's all the relevant information--any additional questions or clarifying statements can be directed to the author of this blog on the comments page.

* Includes, but is not limited to Almost Threesomes, Dance Moments, Knowing Glances, Professions of Love, and Elbow Touches.
Posted by L at 2:30 PM 2 comments: