I've been occupied this week. Busy. I've also been preoccupied with a family health crisis that has been one hell of a roller coaster ride.
Tonight is my first night back at my house in a little while, and everybody on the internet is in a tizzy about this Occupy Wall Street thing. After following a few links, I was led to a page that read "Join Us to Protest Corporate Greed." Big effing whoop.

It's hard when you've been dealing with cold, hard life-and-death realities to give a shit about this abstract stuff. What is meant by protesting Greed with a capital G? 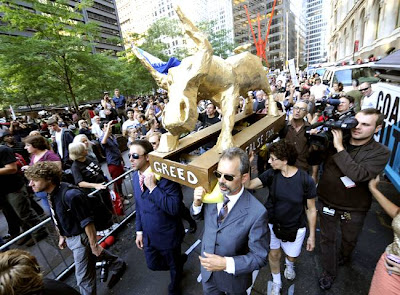 I get it. We're rubbing up against the 10th anniversary of our Great war on Terrorism. We fight Terrorism because we believe in Freedom. And Democracy. And yet, we are still able to audaciously Hope for something better. Because, Yes We Can. So now we protest Greed.

The nebulousness of that all-encompassing term has a frighteningly familiar ring to it. That die-hard self-righteousness. It's that nasty taste in my mouth that's been around for the past 1o years or so...longer.
I'm fed up with this stance. The big sexy ideal stance. We hash tag the hell out of these #GrandIdeals that were fed to us by whom???? We're using a given to spell out the revolution because we have lost any semblance that political acts can exist free of America's moralist culture. It makes us feel better to protest Greed and to Hope and to Fight Terror, because who the hell can dispute any of it? That's so scary; the mere moral indisputability of whatever we're pitted against. I really think that whenever we're ready for change, we need to come back down to earth, and be willing to relinquish a little sex appeal. But, heck, who am I to say.
So we go out, and we Fight The Good Fight against The Big Evil.
Then we go back to our warm homes, crack a beer and congratulate ourselves, and oh did you get the t-shirt? Don't worry, I have an extra.

This self-congratulatory attitude also worries me. Pisses me off, actually. When will people wake up? That even in our protesting habits, we're trapped in this bought-and-sold mentality. We keep gravitating towards these big ideals, that are suffocatingly monolithic, -- but both sides are using them, and soon enough Target will be marketing the Arab Spring Collection and McDonalds the OccuPie.

I really think that one of the most remarkable things about the Egyptian revolution in particular was the notable absence of much of that language. It was green. Yes. From that time (which now feels like ages ago, but we're just talking months here), I mostly remember that wash of green, everybody was wearing green, green scarves, dresses, pins. There was a refreshing lack of ideological impositions. Sure there were the "We Want Democracy!" signs -- oh, but wait, might we go as far to ask ourselves why were they written in English?

Slavoj Zizek gave a speech at Occupy Wall Street today, which is mostly transcribed here. It should be said that I'm a huge fan of Zizek. I like that he's funny, smart as hell, and I really think that he believes that he can make the world a better place with his writing. What more can you ask for from a philosopher? Seeing him talk on the video was great - and his speech was very good. I had been getting more and more fired up about this thing, and his words kind of struck a chord with me, and I realized that my issue wasn't so much with the problem, which is obviously really fucked up, but the packaging, which is, in my opinion, so much more a symptom of the problem as it manifests itself in our day to day lives. Poor Zizek, though. He wants this so bad, if you watch the video, his body moves erratically -- it looks like he's about to take off, or vomit, or collapse, or explode at any minute. He is really f what I'm relatively sure the audience that films him, repeats his every word, cannot feel. He also strikes me as visibly exhausted. I would be too if I were Slavoj Zizek in this world. Perhaps this is why he is also wary -- he cautions against the kind of insidious self-gratification that can come with being Part of Something. He says, "The only thing I’m afraid of is that we will someday just go home and then we will meet once a year, drinking beer, and nostalgically remembering what a nice time we had here. Promise ourselves that this will not be the case."

Too late, my friend, can't you see? We've been bought and sold. He closes by saying, "We know that people often desire something but do not really want it. Don’t be afraid to really want what you desire." We don't know how to do that, that is, until it's branded and stamped onto something with a catchy, bold type face. Or given a sexy name. Yeah we all want something: to want something. It is all we know how to do. Want, buy. We are nowhere close to really understanding what want is, at least not this American Fall.

Sure we may be using the same social networking tools as the Arab Spring, but we've failed to secure a major piece of the puzzle. The really wanting it part. That je-ne-sais-quoi that really puts the animal fire into our Puritan Notions. Mute Zizek's speech, and you'll see what I'm talking about. That's it. We can tweet the bejeezis of a problem -- hell, we invented both Freedom and Twitter, let's use 'em! -- but we forget that the medium is not always the message. Sometimes the message is the message, and the medium is an occasional side effect, borne out of necessity rather than aesthetic preference. What made the Arab Spring special was its umami-ness. The world is starving for the unmistakable, meaty thirst for real justice.

And until we want it [whatever It is], real, ugly animal want, there is no revolution, at least so far as I'm concerned. Revolutions happen all the time, when two people love each other, or when somebody plants a garden on a rooftop, or when somebody feeds another person who is hungry. If we're relying on trends to carry our revolution, where will we be when the trend dies? Gosh. And where the hell would we be if we were in actual crisis as a country. Our lives are pretty good here. We don't have dictators murdering our people, we are not starving to death. We object on Principle, because we are not trained to understand anything else.

We have to want this as if there is no tomorrow, but keep wanting it and wanting it for a hundred thousand tomorrows. It's gotta hurt, because anything that actually comes from the heart tugs, hurts, at least a little bit. It can't be pleasant. Or clever! We have to want it, and not think of the domain name, and not think of the Potential. Dolling it up with our Adobe software and calling it movement. Right now, ugh, this all feels static as hell.

I try to sin as early as possible in any given day, so as to have the maximum time left for redemption. I take LOTS of half and half with honey in my coffee. Or I'll press snooze even though I have to be at work in fifteen minutes.

Then again, there are plenty of sins to be committed midday, afternoon, evening and night. There are my roommate's cookies sitting innocently on the counter. Phone calls to ignore. Splats of tomato sauce on the floor not to wipe up. Shoes to purchase on the internet. But I know that the night will give way to dawn, and I'll have a brand new day.
Posted by L at 7:29 AM No comments: